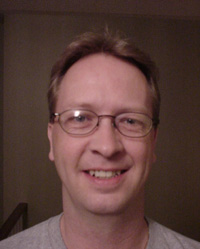 Brad Halstead (www.dreamweavermx-templates.com) is a computer software engineering technologist by trade, but deviated from that dream to join the Canadian military as an air weapons systems technician where he learned all about various computerized aircraft weapons systems as well as loading the munitions. Brad has dabbled in the web in various capacities since 1989 and left the military to become a fulltime computer technician. Brad tries to play an active roll in the support forums for Dreamweaver, Contribute and Project Seven, as time permits him to. Brad is HTML 4.01 Certified, and has contributed content to Dreamweaver MX Magic and Inside Dreamweaver MX, in addition to being a technical editor for both publications. Recently, Brad co-authored Dreamweaver MX Templates and has been accepted as a Team Macromedia Member for Contribute.

He lives in London, Ontario with his cherished partner Brenda and their daughters Megan and Amanda, son Aaron, a Yorkshire Terrier, and their newest addition, a Sheltie.